The greatest thing about blogging is that there is no pressure. It was the best step for me as a longtime journal writer who never wrote continuously in one at a time, but several. One journal may contain a small period of time, but from beginning to end it can span a decade or more. It seems sort of schizophrenic, but it came naturally to me. I have never been one to do things a certain way just because I was taught that it was the only way, or the “right” way. I realize that is simply the hallmark of being an artist, but that doesn’t mean I don’t second guess myself. I am a walking paradox of angular plushness.

God was showing me that what I considered broken pieces were part of a greater system that created the strength and shining light in me that He considered His own brilliant work of art. When I was asked what I would name it, I had no answer. I figured the name would come to me, which it did.

I had continued to build around the space inside and after a particularly exhausting day, found myself curled up on the forest bed, giving thanks and meditating on the deep meaning of it all. That is when I realized that I was in The WOMB. The totality of the significance of it all absolutely felt like a rebirth. I became the stick. Every awful thing that has happened to me in my life, all of what I’ve considered little deaths, are the very things that have paved the way for me to fulfill my purpose in helping others to find their way out of darkness. When a stick broke, I tucked it in. It was a part of the process.

This is all of us. It is about looking beyond what we have perceived as being broken to the greater understanding that we are all a work in progress. Death is not just about a door closing. Every little death, those circumstances we thought had broken us, has the ability to open new doors. It is my experience that once I leaned into whatever each moment had to offer, in complete, unwavering faith, it became easier and easier to hear the voice that would guide me toward becoming everything I am meant to be, sharing my gifts with the world and seeing the masterpiece in myself that God sees. There are an infanitesimal number of doors from which we can choose to open. We may hear the siren’s song and be fooled along the way, but it is The Almighty who whispers in our ear to tell us to try another door. 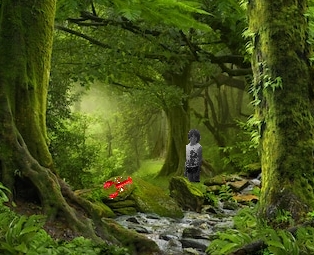